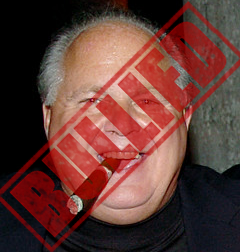 In late 2009 Rush Limbaugh was kicked online while he was down on his back in a hospital by multiple Twitter users following his heart attack. Many of these users went beyond ridiculing him for widely known questionable activities and wished death on the man whose only "crime" was his honest criticism of society.

Some anti-Limbaugh Tweets were as follows:

CarlyMichelleX: Rush Limbaugh in the hospital? Take to many pills Rush? Hahaha.

Qnati: I do hope Rush Limbaugh is saved by a black lesbian doctor with questionable immigration status.

irishduke: Right now in a hospital bed in Hawaii, Rush Limbaugh is thinking "Thank God this happened before ObamaCare passed."

Karstan: sweet! it looks like rush limbaugh may be on his death bed! i hope he is in a lot of pain.

Even after Rush Limbaugh survived despite intense bullying on his almost death bed people kept on attacking him in recovery. Its almost as if these people wished him a second heart attack. One user named "kittlyvoncartier" said "Rush Limbaugh wont die. I haven't been good enough this year for THAT kind of awesomeness." The sad thing is that most of the people quoted in the cited article claimed to hate Limbaugh for saying things they thought were hateful. Hypocrites if ever there were some making comments against things like illegal aliens and having to pay for other people's heath care, while supporting a president who promised change they could believe in, but have not seen.

People need to have less hate in their hearts and stop wishing death on patriotic people like Rush Limbaugh. He only wants what is best for America and will not let hateful internet bullies deter him from spreading his message. #rushlimbaugh #twitter #celebrity #hatespeech #hospital
Published at Tue, 12 Oct 2021 22:08:03 GMT

Neal Horsley Accused of Threatening Elton John on You Tube